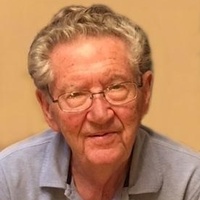 Woodrow E. Brackenrich, better known as Woody, age 95, passed away peacefully at his home in Stuart, Florida, on August 12, 2018.  He was born in Crawley, WV, the second of seven children born to Walter and Gladys Brackenrich.  They moved their family several times before finally settling in Hines, WV, in Greenbrier County.He attended Rupert High School, worked at different jobs to help support the family, and finally joined the Navy in 1944. He served during WW II and loved to talk about his time spent in the Pacific, especially in the Philippines. He was stationed part of the time on a LST (Landing Ship Tank) capable of going shore to shore to deliver tanks, amphibious assault vehicles, and troops. He developed a special bond with his shipmates which continued long after his honorable discharge in 1946. He attended ship reunions in different locations for many years, renewing friendships, until many of his shipmates were unable to travel.

Upon his return to Hines, WV, he met his future wife, Nancy Elizabeth, better known as Betty. She was a young, beautiful redhead who was spirited and enthralled by this handsome young Navy veteran who swept her off her feet. They decided to elope without anyone’s knowledge, going to Virginia where age was not a factor when getting a marriage license. The families finally realized their young love and devotion was real and rejoiced when their first child was born, a daughter named Victoria Anne.

Woody worked in the local coal mines until he was negatively affected by witnessing accidents as well as being in an accident himself.  He decided to stop working in the coal mines and moved his family to Wheeling, WV, where he went to barber school. He returned to Rainelle, WV, completed building the house he began building himself before he went to barber school, and started his career as a barber. He soon found more opportunities for employment in a nearby railroad town, Hinton, WV, which was experiencing an economic boon.  During this time, they were overjoyed when their son, Rick, was born.

In 1955, they decided to move to Hinton, about 35 miles away, where they raised their family.  He bought a barber shop, Temple Barber Shop, one where he had already worked for many years. With the support of her husband, Betty went to Concord College in Athens, WV, and became a high school math and art teacher while Woody became a successful business owner in addition to spending time working with youth organizations like 4H and various sports teams. He always made himself available any time he saw a need to help the Hinton youth.

They decided to move to Stuart, Florida, in 1977 where Betty continued her teaching career and Woody worked in several barber shops before setting up his own shop, Cutting Quarters. Unfortunately, his life was turned upside down when Betty became ill with cancer and passed away in 1983 at the young  age of 56. He was extremely lucky to meet a very pretty, energetic widow, Mary Claire, who had just lost her husband to cancer. She became his best friend, then his partner, and finally his second wife in 1987 when he surprised her with an impromptu wedding in Las Vegas.

After Woody retired in 1987, he and Claire traveled all round the United States, Canada, and Mexico in their motor home, doing so until they sold their last motor home just three years ago.
When they weren’t traveling, they loved playing tennis, bowling, riding all the attractions at Disney World, and any day, Woody would be mowing the grass on his tractor while Claire was busy pulling weeds. Woody also still continued his passion for building and renovating properties whenever he could. Claire and he have had an enduring love and devotion to each other, recently celebrating 31 years of marriage.

His love of life and family was always evident as was his infectious personality. He will be missed by all who knew him and loved him