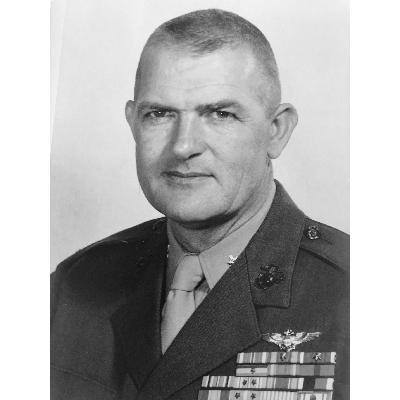 Maj. Hunter Served and saw action in World War II, Korea and Vietnam during his service to our Nation.

Maj. Hunter has the distinction of being one of Roosevelt’s Raiders during his service.

At the outbreak of World War II, Paul dropped out of high school and joined the U.S. Marine Raiders. The Raiders were the special forces of their time. In 1944, The Raiders were incorporated into the 6th Marine Division. Paul was wounded in the battles for Guam and Okinawa. He was awarded two Purple Hearts. In 1945, Paul participated in the occupation of Yokosuka at the time of the Japanese surrender.

After the war, Paul left the service to pursue his passion of flying, by using the GI Bill to become a flight instructor. In 1948, Paul re-enlisted in the U.S. Marine Corps and was stationed at Quantico, Virginia, where he met his future wife, Margaret Ellen Krucelyak. He was accepted into the naval aviation training program. Upon completion of his flight training, Paul was commissioned as a Second Lieutenant in the U.S. Marine Corps and married Margaret.

His nineteen years as a commissioned officer included combat in the Korean War and the Vietnam War. During his career he flew several different types of aircraft, but his favorite aircraft was the Chance Vought F8U Crusader. The F8U Crusader was a supersonic single engine jet fighter. He was awarded the Distinguished Flying Cross and several Air Medals.

We have never met our Hero, but his service to our Country was Heartfelt and Honorable.

We stand here to Honor his life – his service – and his memory.

Rest easy Sir, – your Tour of Duty is complete.