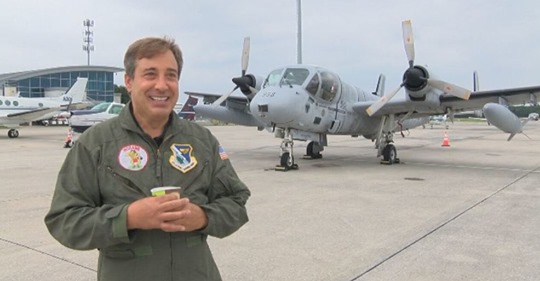 We have never met our Hero, but his Mission to Honor our Servicemen in Vietnam was Heartfelt and Honorable.

We Honor his life – his service – and his memory.

A Myrtle Beach pilot is on a mission.

He has a day job as a dermatologist, but he devotes his free time to honoring those who served and to remembering those who never made it home from the Vietnam War.

“The aircraft is very aerobatic. And armored. It’s very hard to shoot this down,” said Dr. Joe Masessa, talking to some onlookers.

Dr. Joe Masessa is used to answering questions about his plane.

He spotted one nine years ago at an airshow and bought one of only two for sale at the time.

“I was awed by the aircraft. The funny-looking nose. The large engines. I’ve got to have one of these. It’s an absolute gem,” he said.

His passion for the aircraft is clear.

“When we land, we don’t even need to hit the brakes on the aircraft. We can just put the propellers in reverse, and slow the aircraft down,” he said, showing off the large propellers.

He knows every inch and rivet.

“They were built in the late 50s and were in Vietnam during surveillance and reconnaissance, all through the Vietnam War and all conflicts after that period through the Gulf War in ’91,” said Dr. Masessa.

“There are 1,636 missing in action, unaccounted for, from the Vietnam War. In this day and age, could you imagine that?”

Each one with a story.

A flag is placed each time a missing soldier is identified.

For Masessa, keeping the plane in working order is not a hobby.

One he is proud to carry on.

“Our mission is to make sure that no one forgets these people. And to honor them while they’re still around.”

Masessa has flown the OV-1 Mohawk in more than 100 airshows over the last seven years.

Dr. Masessa’s plane went down at the 2019 Stuart Airshow doing what he loved and was dedicated to do. We Honor his legacy.